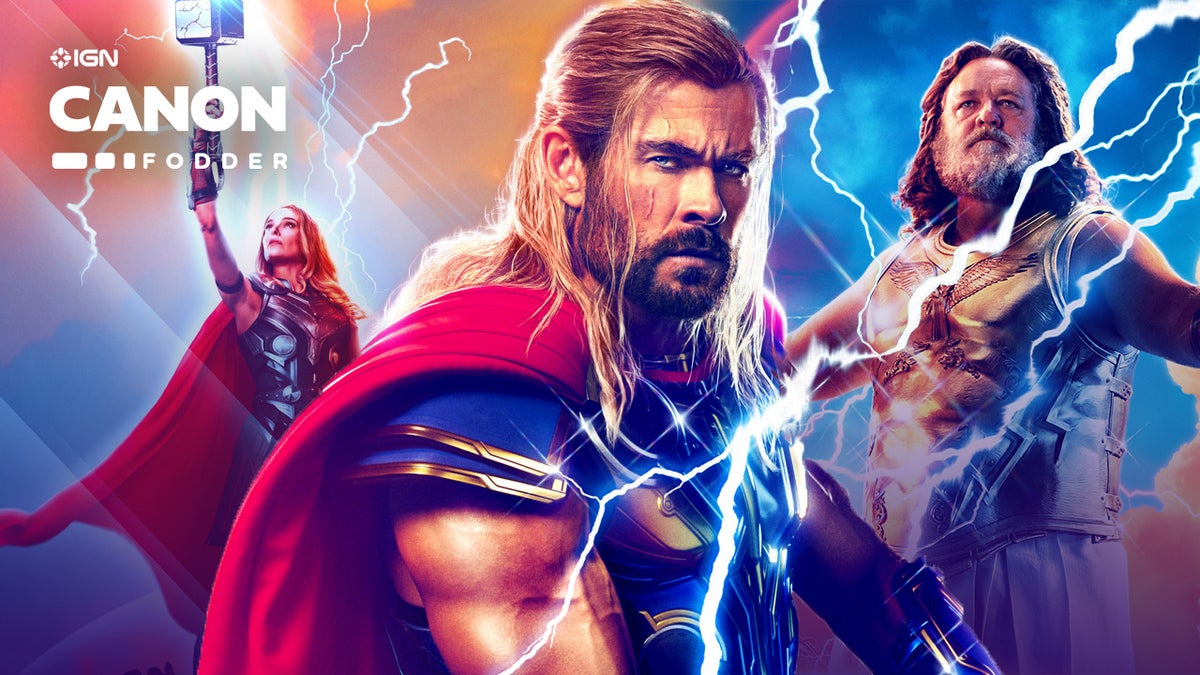 Sweet child of mine! Thor: Love and Thunder shows there’s life after Ragnarok, and all’s fair in Love and Thor. And this time around, the Odinson and Stormbreaker are joined by a Mjolnir-wielding Dr. Jane Foster, a.k.a. the Mighty Thor. Directed by Taika Waititi, the God of Thunder’s fourth solo film pits both Thors against a Gorr, who literally has “God Butcher” as his job title. What could go wrong?

A Visual History of Thor

Here’s the plot of the film in a nutshell: Jane Foster (Natalie Portman) returns as the Mighty Thor thanks to Mjolnir, which is also back in action. Thor (Chris Hemsworth) gets his groove back, loses all that Endgame weight, and ditches the Asgardians of the Galaxy so they can go close out their trilogy. Gorr the God Butcher kidnaps a bunch of kids from New Asgard to draw Thor and Stormbreaker into a trap, so Thor, Mighty Thor, and King Valkyrie (Tessa Thompson) team up to get the kids back. This leads them to the Easter egg-filled Omnipotence City, where Thor throws Zeus’ (Russell Crowe) own lightning bolt through his chest. The Thors make it to the Shadow Realm to fight Gorr, but not before he reaches the wish-granting Eternity and brings his dead daughter back to life (before dying himself). Jane also dies, sacrificing herself to stop Gorr. Thor adopts Gorr’s orphan and takes her superheroin’ around the universe as the titular Love and Thunder. The end (aside from the post-credits – scroll down for those!).

So to dig into that ending a little more closely, Gorr needs Thor’s trusty axe Stormbreaker and its bifrost capabilities to open a door to Eternity. That’s why he kidnapped the kids – to lure the Thors to him. When Thor and Mighty Thor arrive to save the kids, Thor tells them to get ready to fight. As they pick up random junk laying around – or clutch their stuff animals – he endows them with his own powers “for a limited time only.” A bunch of kids in god mode then proceed to beat the crap out of Gorr’s horde of nightmarish, Lovecraftian shadow creatures to the tune of the best part of “November Rain.”

Jane, who has been suffering from cancer recently, basically sacrifices herself to save the children. Earlier in the film, she tells Thor that every time she becomes Mighty Thor, it saps her of more of her strength as Jane Foster. Jane still chooses to use Mjolnir in the final battle despite the fact that she knows it will kill her… and it does.

As Mighty Thor, she manages to use Mjolnir to shatter Gorr’s Necrosword, which seemingly saps his powers. But despite all of this, he does make it to Eternity and as such gets to make a wish. The Thors follow him as he goes through the portal to meet Eternity, but Jane’s cancer has caught up with her and she dies in Thor’s arms. Thor convinces Gorr to not use his wish for vengeance as originally planned, but to instead choose love. Coincidentally, Love was apparently his dead daughter’s name (or nickname), and so Gorr chooses to resurrect her instead of killing all gods everywhere as he had originally planned.

Dying after he does this, Gorr gets to hug and kiss his little girl before he goes. And so it’s a bittersweet ending. Jane’s gone (we see that she’s immortalized as the Mighty Thor, a.k.a. Dr. Jane Foster, in statue form in New Asgard), but Thor basically has a daughter now, and they’re doing the superhero thing around the galaxy.

Does Thor: Love and Thunder Have a Post-Credits Scene?

Yes, Thor: Love and Thunder has a post-credits and a mid-credits scene.

Marvel’s Hercules: An Incredible Journey From Myth to Avenger

We get Hercules in the mid-credits scene. It opens on Zeus, nursing a lightning bolt-sized hole in his sternum and grumbling about what literally just happened in Omnipotence City. It’s clear he’s talking to somebody – you know how these things wait until the last shot in the scene reveals what we want to see. Here, it’s live-action Hercules, played by Brett Goldstein (Roy Kent) from Ted Lasso.

We only get the one shot of him, but it’s pretty clear that Zeus is upset at having his chest pierced with his own weapon and he’s sending in his boy Hercules – who got mentioned earlier in the film – to deliver some god-sized revenge to the God of Thunder.

Hercules first appeared in Marvel Comics in The Avengers #10 in 1964, where he was summoned by the villain Immortus to mix it up with Thor. Only that wasn’t really Hercules.

It’s a long story, but check out our Hercules in Love and Thunder explainer for all the details.

Here’s a question: Is Loki in Valhalla too?

As for the post-credits scene, we find Jane Foster’s spirit re-awakening in Valhalla. Valhalla is the afterlife of the Norse gods, and there’s a lot of talk about it in this movie. As Jane appears, none other than Idris Elba’s Heimdall (who died back in Avengers: Endgame) is right there to greet her.

And that’s basically it. The credits end, an onscreen card says Thor will return, and that’s the end of the movie. The Valhalla scene is a heartwarming bookend to Jane’s story after she dies heroically, sacrificing herself to save the children. Jane definitely died a hero, but the Valhalla scene explains that yes, she is as dead as Heimdall is, but at least her passing is not truly the end of her story. Because that’s not how death works in the MCU anymore, it seems…

Jane and Heimdall showing up in Valhalla is most likely a simple goodbye to both characters, but if Gorr was able to resurrect his daughter by reaching Eternity, maybe it’s not out of the question that Thor could eventually do the same thing. Realistically, however, this was probably just an excuse to give Jane a proper sendoff in a better movie than Thor: The Dark World.

But here’s a question: Is Loki in Valhalla too? Not 2012 Loki, who is currently goofing around with variants with the TVA, but rather Loki Prime, who died in Avengers: Infinity War. He died in battle, which this movie tells us is a requirement for getting into Valhalla. And this is after he helped Thor save the Asgardians in Ragnarok. His final acts were valiant ones, and based on the basic Valhalla rules put out there in Love and Thunder, we think he’s probably in there too.

Any time a new MCU movie or Disney + show comes along, we always have to try and extrapolate where things will go next, and when it comes to Thor… well, the door is still wide open.

Thor’s story is still totally viable for more movies. At the end of Avengers: Endgame, he headed off to space for adventures with the Asgardians of the Galaxy. He kind of ends this movie the same way, except instead of a ship full of a-holes, he’s palling around with Love, Gorr’s resurrected daughter. So maybe the duo will go on all kinds of fun space adventures and the next Thor film could actually be a literal Love and Thunder movie.

Keep in mind that at this point the Avengers don’t really exist. Tony’s dead, Cap is old, and Nat’s also dead. But at some point an existence-level threat has gotta happen that needs a group of gifted individuals to work together, and Thor seems like a likely candidate to join in on the fun.

Right now, with all of the threats the MCU has placed on the table since Endgame, the most likely candidate for that existence-level threat still has to be Kang the Conqueror. Introduced in Loki, Kang is also set to appear in Ant-Man and the Wasp: Quantumania in 2023. And since Kang was one of the original comic-book Avengers villains, if a new version of Earth’s Mightiest Heroes re-assemble to face this guy, Thor would almost certainly be involved.

But ultimately, all we know for sure right now is what it said onscreen at the end of Love and Thunder: Thor will return.

Let’s run through all of the Easter Eggs we found in the film:

But what did you think of Thor: Love and Thunder? Where will we see Hercules pop up again and is there a Loki there in Valhalla? Let us know what you think in the comments!

DeSantis going ‘hat in hand’ to Biden for hurricane aid