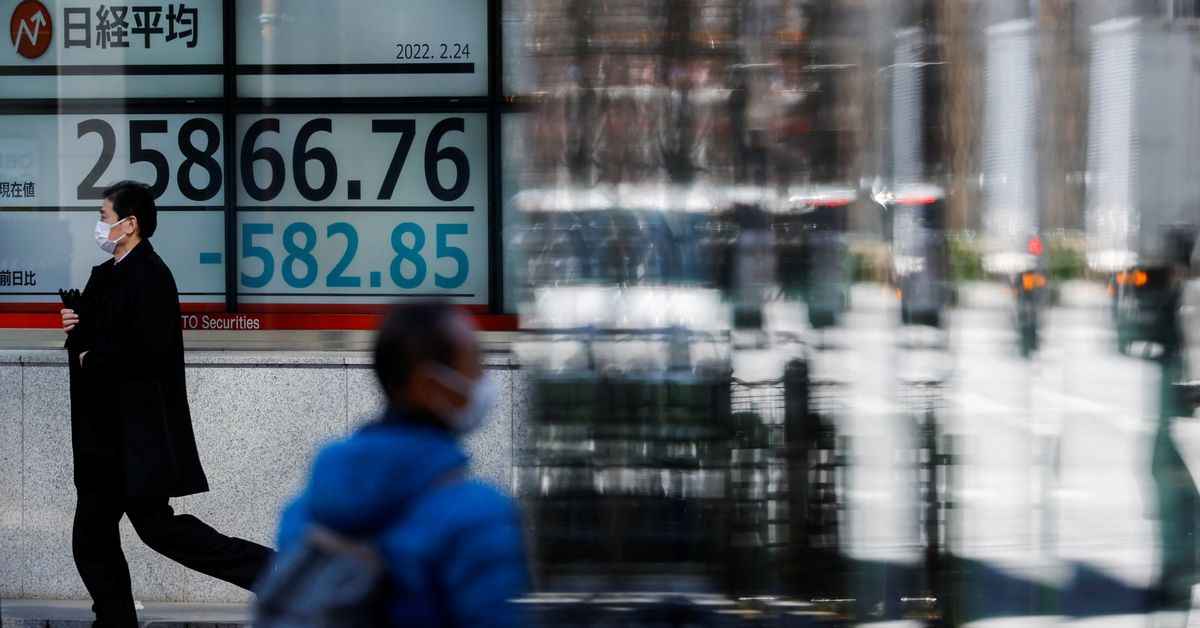 SYDNEY, Sept 19 (Reuters) – Shares slipped in Asia on Monday and the dollar firmed as investors braced for a packed week of central bank meetings that are certain to see borrowing costs rise across the globe, with some risk of a super-sized hike in the United States.

Markets are already fully priced for a rise in interest rates of 75 basis points from the Federal Reserve, with futures showing a 20% chance of a full percentage point.

They also show a real chance rates could hit 4.5% as the Fed is forced to tip the economy into recession to subdue inflation. read more

“Our answer is high enough to generate a tightening in financial conditions that imposes a drag on activity sufficient to maintain a solidly below-potential growth trajectory.”

He expects the Fed to hike by 75 basis points on Wednesday, followed by two half-point moves in November and December.

Also important will be Fed members’ “dot plot” forecasts for rates, which are likely to be hawkish, putting the funds rate at 4%-4.25% by the end of this year, and even higher next year.

That risk saw two-year Treasury yields surge 30 basis points last week alone to reach the highest since 2007 at 3.92%, so making stocks look more expensive in comparison and dragging the S&P 500 down almost 5% for the week.

China’s central bank went its own way and cut a repo rate by 10 basis points to support its ailing economy, leaving blue chips (.CSI300) up 0.1%.

A RUSH TO TIGHTEN

“But with both U.S. yields and the unemployment rate headed to 4-5%, poor sentiment isn’t enough to keep the S&P from making new lows for the year,” warned BofA analysts in a note.

“Our suite of 38 proprietary growth indicators depict a grim outlook for global growth, yet we are staring at one of the most aggressive tightening episodes in history, with 85% of the global central banks in tightening mode.”

Most of the banks meeting this week – from Switzerland to South Africa – are expected to hike, with markets split on whether the Bank of England will go by 50 or 75 basis points. read more

“The latest retail sales data in the UK supports our view that the economy is already in recession,” said Jonathan Petersen, a senior market economist at Capital Economics.

“So, despite sterling hitting a fresh multi-decade low against the dollar this week, the relative strength of the U.S. economy suggests to us the pound will remain under pressure.”

One exception is the Bank of Japan, which has so far shown no sign of abandoning its uber-easy yield curve policy despite the drastic slide in the yen. read more

The dollar edged up to 143.25 yen on Monday , having backed away from the recent 24-year peak of 144.99 in the face of increasingly strident intervention warnings from Japanese policymakers.

The euro was holding at $0.9991 , having edged just a little away from its recent low of $0.9865 thanks to increasingly hawkish comments from the European Central Bank.

The ascent of the dollar and yields has been a drag for gold, which was hovering at $1,668 an ounce after hitting lows not seen since April 2020 last week.

Oil prices were trying to bounce on Monday, having shed around 20% so far this quarter amid concerns about demand as global growth slows.