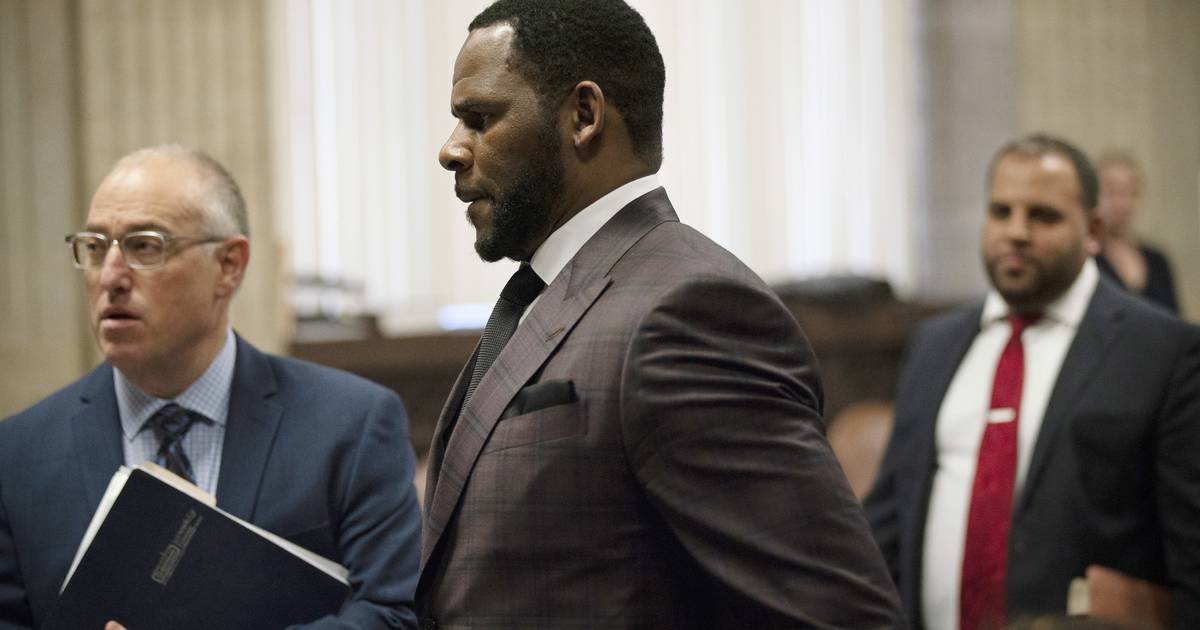 Opening statements in the case against disgraced R&B superstar R. Kelly began Wednesday with prosecutors outlining their accusations in the plainest possible language.

“The defendant, Robert Kelly, had sex with multiple children,” Assistant U.S. Atty. Jason Julien told the jury. “He made videotapes of himself having sex with children. And these two (co-)defendants, Derrel McDavid and Milton Brown, knew about it.”

In his heyday, Kelly was a high-flying Grammy-winning legend, Julien said. But he “had another side, a hidden side, a dark side, that he — with the help of McDavid and Brown — did not allow the world to see.”

Julien characterized Kelly as a serial predator who had sex with minors hundreds of times, and went to “extraordinary lengths” to cover that up when authorities began to investigate.

Julien said the sex included relations with Kelly’s own goddaughter, “Jane,” including many encounters he videotaped. Jurors are expected to see parts of three videotapes depicting Kelly having sexual contact with Jane; in two of them, Kelly repeatedly refers to her “14-year-old” anatomy, Julien said.

Another videotape allegedly depicting child pornography will not be shown to jurors because Kelly and the defendants successfully covered it up, according to prosecutors. But witnesses will testify about its existence, Julien said.

When authorities started investigating one of the tapes in the early 2000′s, Kelly sent “Jane” and her family on a month-long trip out of the country, and when they got back they lied to authorities about the tape at Kelly’s behest. Over the next few years they got drawn deeper into Kelly’s web, prosecutors said, at one point becoming largely financially dependent upon him.

As Kelly was awaiting trial in Cook County he and the co-defendants made wide-ranging efforts to locate and cover up other tapes of him with “Jane,” prosecutors said, including one payoff that happened during the 2008 trial, they said.

Kelly’s attorney Jennifer Bonjean, in turn, urged jurors to consider whether Kelly might be a victim himself: “Of financial exploitation, extortion,” she said.

“There are strong motivators out there,” she said. “The government’s case really does hinge on the testimony of liars, extortionists, people who engaged in the business of trafficking pornography.”

Bonjean acknowledged that many of the jurors said they were familiar with Kelly and some of the allegations against him.

“(Prosecutors) believe their evidence is going to show that he is a serial child sexual abuser. That’s what they believe,” Bonjean said. “And it is true that Mr. Kelly is imperfect. It is true that on his journey from poverty to stardom that he stumbled along the way. It is important when the government wants to paint him as a monster that you remember we are talking about a human being. We implore you to keep those emotions in check.”

Some of the counts against Kelly involve videotaped evidence, which could be difficult to refute. Other counts will largely rely instead on witness testimony.

Kelly sat hunched at the defense table throughout opening statements, dressed in a dark blue suit and light blue tie. For the most part he appeared to be fixing his gaze straight ahead, even when Bonjean reintroduced him to the jury, which is seated to his left in the courtroom.

At times during prosecutors’ opening remarks, he shook his head slightly. And when Bonjean told jurors he was not expecting any special treatment, he nodded.

In opening statements on behalf of McDavid, attorney Vadim Glozman said that the former business manager only ever acted at the behest of Kelly’s accomplished attorneys and investigators, none of whom would have risked their careers to cover up child pornography.

And back in the early 2000s, McDavid had every reason to believe the tape at the center of the Cook County case was illegitimate, Glozman said.

“Because he believed that, there was never any intention to obstruct justice,” he said.

McDavid will take the stand and testify on his own behalf, Glozman said.

Opening statements began after two full days of jury selection. The 12 jurors and six alternates were sworn in late Tuesday. They are expected to hear evidence and arguments over roughly the next four weeks.

U.S. District Judge Harry Leinenweber took the bench around 10 a.m. with a rather ominous proclamation: “Things are never intended to be easy,” he said.

One juror called to say she had developed a medical problem and wanted to be dismissed. Leinenweber excused her and replaced her with an alternate. Proceedings were further delayed since two other jurors were stuck on a late Metra train.

Leinenweber, who questioned more than 100 potential jurors on Monday and Tuesday, dismissed nearly half for “cause,” generally because they indicated they wouldn’t be fair or because jury duty would present a significant hardship.

Many of those on the panel said they’d heard of Kelly and the accusations against him before, but could remain fair. Some even said they’d seen parts of “Surviving R. Kelly” but had formed no opinion about Kelly himself.

The final panel was selected after both prosecutors and attorneys for Kelly and his two-co-defendants used their peremptory strikes to further pare down the jury pool.

Things got testy Tuesday when Kelly’s lead attorney, Jennifer Bonjean, successfully challenged three of the prosecution’s strikes of Black jurors, alleging they were based solely on race.

She said prosecutors were displaying a pattern against Black jurors that was “quite disturbing,” though the Assistant U.S. Attorney Jeannice Appenteng said they had reasons to remove the jurors unrelated to race.

On the flip side, nearly every single peremptory strike by the defense involving the regular jury makeup was of a white person — 12 in all. The defense also moved to strike one Asian woman and one Black woman. Prosecutors, however, did not raise any challenges based on that racial breakdown.

Kelly, 55, was charged with child pornography and obstruction of justice in a 2019 indictment alleging he conspired with others to rig his Cook County trial years ago by paying off a teenage girl whom he sexually assaulted on a now-infamous videotape.

Also facing trial are Kelly’s former business manager, Derrel McDavid, and another associate, Milton “June” Brown, who, according to the indictment, schemed to buy back incriminating sex tapes that had been taken from Kelly’s collection and hide years of alleged sexual abuse of underage girls.