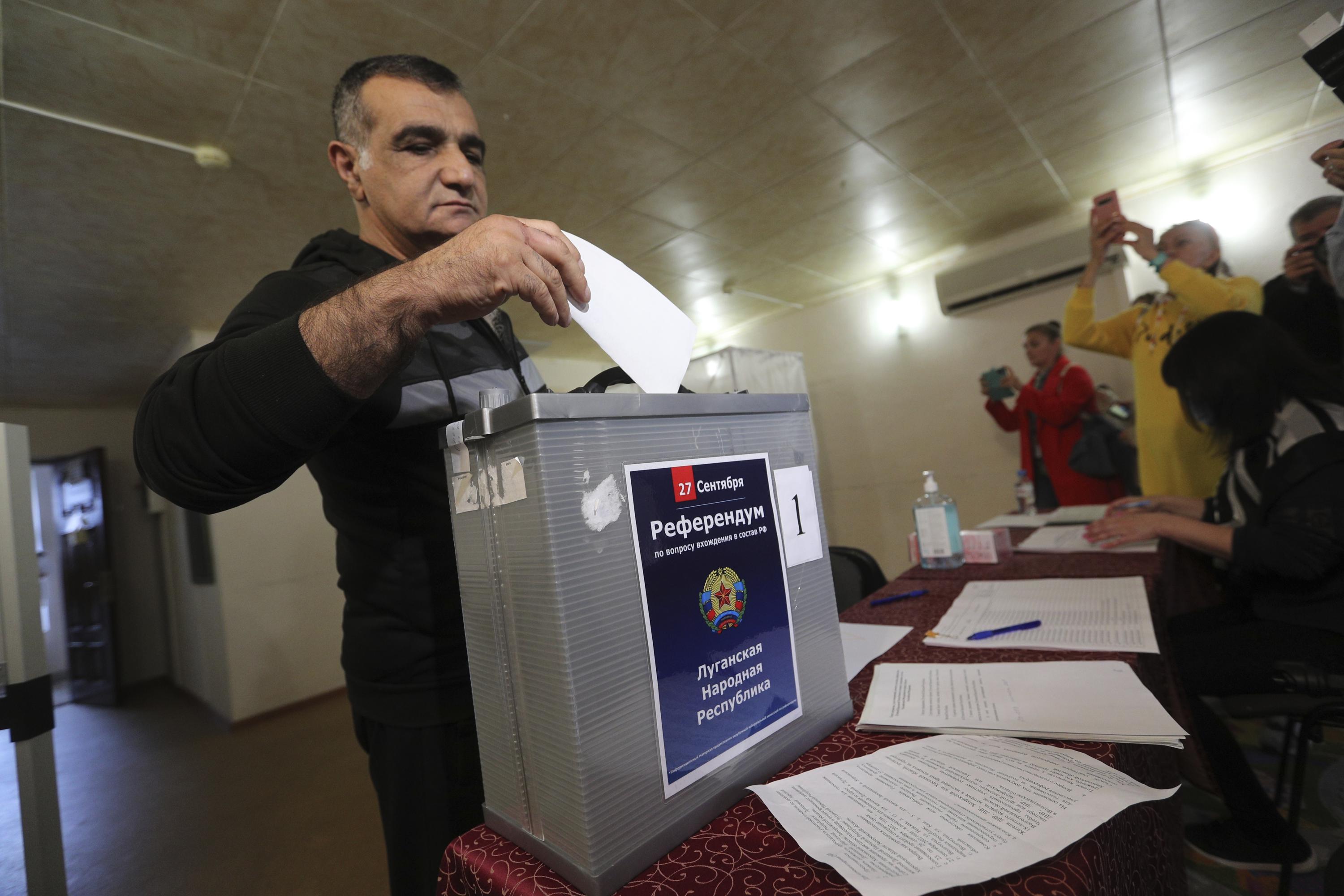 KYIV, Ukraine (AP) — A Kremlin-orchestrated referendum got underway Friday in occupied regions of Ukraine that sought to make them part of Russia, with some officials carrying ballots to apartment blocks accompanied by gun-toting police. Kyiv and the West condemned it as a rigged election whose result was preordained by Moscow.

In a grim reminder of the brutality of the 7-month-old invasion, meanwhile, U.N. experts and Ukrainian officials pointed to new evidence of Russian war crimes. Kharkiv region officials said a mass burial site in the eastern city of Izium held hundreds of bodies, including at least 30 displaying signs of torture.

The referendums in the Luhansk, Kherson and partly Russian-occupied Zaporizhzhia and Donetsk regions were widely seen as a prelude to Moscow annexing the regions. The voting overseen by authorities installed by Russia, scheduled to run through Tuesday, is almost certain to go the Kremlin’s way.

Authorities in the Kherson region said residents of a small Moscow-controlled area of the neighboring Mykolaiv province also will be able to vote, and that small area was “incorporated” into Kherson until all of Mykolaiv is taken over by Russian forces.

Ukraine and the West said the vote was an illegitimate attempt by Moscow to slice away a large part of the country, stretching from the Russian border to the Crimean Peninsula. A similar referendum took place in Crimea in 2014 before Moscow annexed it, a move that most of the world considered illegal.

Election officials were carrying ballots to homes and setting up makeshift polling stations near apartments in the referendum, taking place over four days, with officials citing safety reasons. Russian state TV showed one such election team accompanied by a masked police officer carrying an assault rifle.

Ivan Fedorov, the Ukrainian mayor of Melitopol in the Zaporizhzhia region, told The Associated Press that Russians and residents of Crimea were brought into his city to urge people to vote.

“The Russians see an overwhelming reluctance and fear to attend the referendum and are forced to bring people… to create an image and an illusion of the vote,” he said. “Groups of collaborators and Russians along with armed soldiers are doing a door-to-door poll, but few people open the doors to them.”

Voting also occurred in Russia, where refugees and other residents from those regions cast ballots.

Denis Pushilin, the Moscow-backed separatist leader in the Donetsk region, called the referendum “a historical milestone.”

Lawmaker Vyacheslav Volodin, the speaker of Russia’s State Duma, said in an online statement to the regions: “If you decide to become part of the Russian Federation, we will support you.”

Thousands attended pro-Kremlin rallies across Russia in support the referendums, news agencies reported. “Long live the one, great, united Russian people!” one speaker told the large crowd at a central Moscow rally and concert titled, “We Don’t Abandon Our Own.”

Luhansk Gov. Serhii Haidai accused officials of taking down the names of people who voted against joining Russia. In online posts, Haidai also alleged that Russian officials threatened to kick down the doors of anyone who didn’t want to vote.

Ukrainian President Volodymyr Zelenskyy only briefly mentioned the “sham” referendums in an address. He switched from speaking Ukrainian to Russian to tell Russian citizens that under President Vladimir Putin’s partial mobilization order Wednesday, they were being “thrown to their deaths.”

“You are already accomplices in all these crimes, murders and torture of Ukrainians,” he said. “Because you were silent. Because you are silent. And now it’s time for you to choose. For men in Russia, this is a choice to die or live, to become a cripple or to preserve health. For women in Russia, the choice is to lose their husbands, sons, grandchildren forever, or still try to protect them from death, from war, from one person.”

Putin’s partial mobilization of reservists could add about 300,000 troops, his defense minister said. Kremlin spokesman Dmitry Peskov dismissed as false media reports of plans to muster up to 1.2 million troops.

Across the vast country, men hugged their weeping family members before departing as part of the call-up, which has raised fears that a wider draft might follow. Antiwar activists planned more protests Saturday.

Other Russian men tried desperately to leave the country, buying up scarce plane tickets and creating traffic jams hours or even days long at some borders. The lines of cars were so long at the border with Kazakhstan that some people abandoned their vehicles and walked — just as some Ukrainians did after Russia invaded their country Feb. 24.

The mobilization and referendums take place against the backdrop of incessant fighting in Ukraine, with Russian and Ukrainian forces exchanging fire as both sides refuse to concede ground.

Kharkiv regional Gov. Oleh Synyehubov and the region’s police chief, Volodymyr Tymoshko, said at least 30 of the 436 bodies exhumed so far in Izium bore signs of torture. Among them were the bodies of 21 Ukrainian soldiers, some found with their hands bound behind their backs, they said.

Russian forces occupied Izium for six months before being pushed out of the area by a Ukrainian counteroffensive earlier this month.

The exhumations, which began a week ago, are nearing an end, as investigators work on identifying victims and the cause of death. A mobile DNA lab was parked at the edge of the burial site.

“Each body has its own story,” Synyehubov said.

Experts commissioned by the U.N. Human Rights Council also presented evidence Friday of potential war crimes, including beatings, electric shocks and forced nudity in Russian detention facilities, and expressed grave concerns about killings the team was working to document in Kharkiv and the regions of Kyiv, Chernihiv and Sumy.

With world opinion pushing Moscow deeper into isolation over the war, Russian officials lashed out against the West. Russia’s ambassador to the U.S., Anataly Antonov, said at a Moscow conference Friday about the 1962 Cuban missile crisis that Washington is trying to bring Russia “to its knees” and divide it into “several fiefdoms” while stripping it of its nuclear weapons and its permanent seat at the U.N. Security Council.

In new reports of fighting over the last 24 hours, Ukraine’s presidential office said 10 civilians were killed and 39 others were wounded by Russian shelling in nine Ukrainian regions. Battles continued in the southern Kherson during the vote, it said, while Ukrainian forces meted out 280 attacks on Russian command posts, munitions depots and weapons.

Heavy fighting also continued in the Donetsk area, where Russian attacks targeted Toretsk, Sloviansk and several smaller towns. Russian shelling in Nikopol and Marhanets on the western bank of the Dnieper River killed two people and wounded nine in Marhanets.

Follow the AP’s coverage of the war at https://apnews.com/hub/russia-ukraine