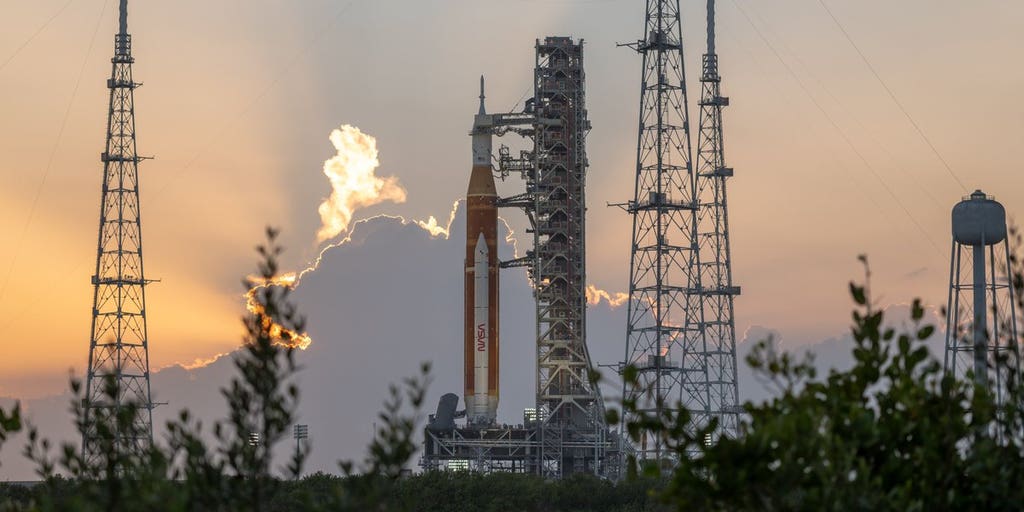 The Space Launch System rocket and Orion spacecraft sits on launchpad 39B at Kennedy Space Center ahead of a second launch attempt on Sept. 3, 2022. (Image: NASA)

KENNEDY SPACE CENTER, Fla. – After completing a fueling test of its mega moon rocket earlier this week, NASA engineers now have to contend with Tropical Depression Nine that appears to be aimed at Florida.

NASA managers plan to provide an update on a possible launch attempt and the next steps for the SLS and Orion, which make up the Artemis-1 mission. The moon rocket is vertical at Kennedy Space Center launchpad 39B on Florida’s east coast, awaiting a third launch attempt.

After two previous scrubs due to unruly hydrogen leaks and an engine cooling issue, NASA fueled the SLS with more than 700,000 gallons of cryogenic propellant during a test Monday to determine if engineers had resolved the problems.

NASA is hoping to launch on Sept. 27 at 11:37 a.m. EDT. However, it’s not up to the space agency. NASA first needs approval from the Space Force, which oversees the Eastern Range, to extend the Flight Termination System certification due to safety requirements. The FTS is required on all rockets and would cause the vehicle to self-destruct if it veers off course and threatens the public.

The Sept. 27 launch date and a backup window on Oct. 2 are under review by the Space Force. NASA needs an answer soon if the agency is going to launch on Tuesday.

In the past week, the tropics have become full of activity after a slow start to the Atlantic hurricane season.

WHAT IS THE ‘CONE OF UNCERTAINTY’ IN HURRICANE FORECASTS?

This particular system will be a factor in any upcoming Artemis launch attempt because Tropical Depression Nine is forecast to become a tropical storm later Friday and strengthen into a hurricane and possibly make landfall on the Florida Peninsula next week.

Tropical Depression Nine will move into an area containing much lower wind shear this weekend.

If a tropical system does bring strong winds to Florida’s Space Coast, NASA would need to roll the 322-foot-tall rocket back into the Vehicle Assembly Building. That 2-mph move to the hangar cannot happen in winds over 46 mph.

Check back for updates after the 12:30 p.m. EDT NASA briefing, and stay with FOX Weather for the last on Tropical Depression Nine.