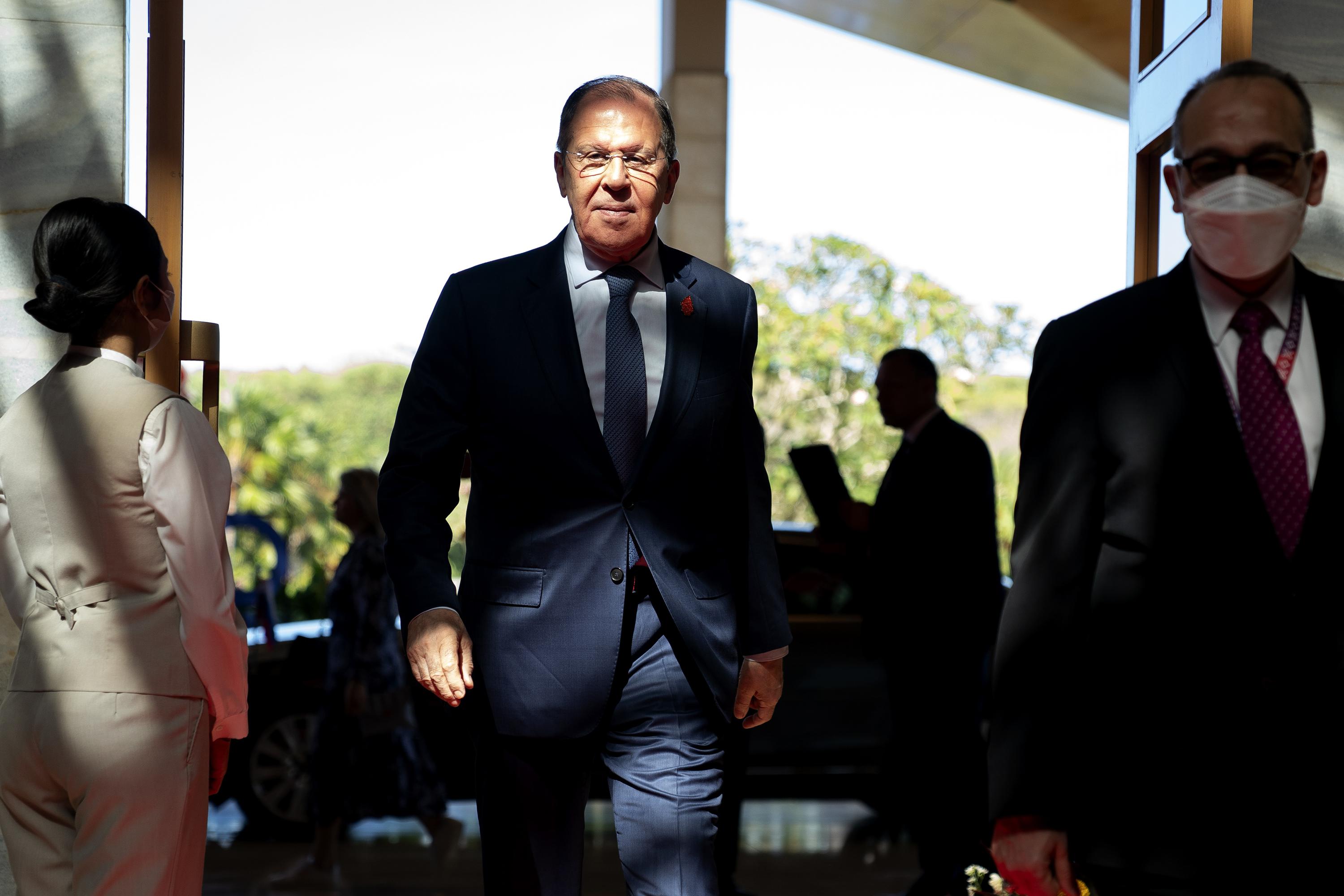 NUSA DUA, Indonesia (AP) — Deeply divided top diplomats from the world’s richest and largest developing nations struggled to find common ground Friday over Russia’s war in Ukraine and how to deal with its global impacts.

At talks that were were knocked off balance by two unrelated and unexpected political developments far from the Indonesian resort of Bali where they were meeting, Group of 20 foreign ministers heard an emotional plea for unity and an end to the war from their Indonesian host.

Yet, consensus appeared to remain elusive amid deepening East-West splits driven by China and Russia on one side and the United States and Europe on the other. All the main players were there, marking the first time since Russia’s invasion of Ukraine that U.S. Secretary of State Antony Blinken and Russian Foreign Minister Sergey Lavrov have been in the same room at the same time.

Lavrov walked out of the proceedings at least twice: once when his German counterpart Annalena Baerbock spoke at the opening session and again just before Ukrainian Foreign Minister Dmytro Kuleba was to speak by video at the second session, according to a western diplomat present.

Both Johnson and Abe are well known to the G-20 family, having participated in numerous similar conferences and leaders’ summits in the past. One goal of Friday’s meeting was to lay the groundwork for the upcoming G-20 summit that Indonesia will host in November.

Many, if not all, of the participants expressed their shock at Abe’s shooting that occurred as they were holding the first of two plenary sessions on the importance of restoring confidence in multilateralism and upholding the global rules-based order.

“The world has yet to recover from the pandemic but we are already confronted with another crisis: the war in Ukraine,” Marsudi said. “The ripple effects are being felt globally on food, on energy and physical space.”

She noted that poor and developing countries now face the brunt of fuel and grain shortages resulting from the war in Ukraine and said that the G-20 has a responsibility to step up to deal with the matter to ensure the rules-based global order remains relevant.

The Ukraine war has shaken that order, she said, as Lavrov appeared to shuffle papers without expression at his seat in between the foreign ministers of Saudi Arabia and Mexico.

“Honestly, we cannot deny that it has become more difficult for the world to sit together,” Marsudi said. She added plaintively: ”“The world is watching us, so we cannot fail.”

Indeed, though they sat around the same large conference table for the opening, neither Lavrov nor Blinken showed any interest in each other and the two had no plans to meet.

“You know, it was not us who abandoned all contacts,” Lavrov told reporters after the first session. “It was the United States. That’s all I can say. And we are not running after anybody suggesting meetings. If they don’t want to talk, it’s their choice.”

Shortly thereafter, Blinken took direct aim at the Russian delegation, accusing Moscow in the second G-20 session of blocking millions of tons of grain in Ukrainian ports and causing food insecurity in large parts of the world, according to a western diplomat present.

Lavrov was not there for the comments and his replacement began Russia’s intervention by telling the group she did not have prepared remarks, according to the diplomat, who spoke on condition of anonymity to describe the closed-door meeting.

At a separate meeting, Blinken hailed Marsudi’s speech. “We see the effects of COVID still lingering around the world, unfortunately we also see the effects of the Russian aggression against Ukraine making things even more difficult than they already were,” he told her.

Notwithstanding Marsudi’s appeal, there was little prospect for achieving the kind of lofty consensuses on weighty issues that have been a hallmark of past gatherings.

U.S. officials say they are determined not to allow distractions to divert attention from what they believe should be the primary focuses of the Bali conference: the disruption to world food and energy supplies caused by Russia’s war in Ukraine, blaming Moscow for it, and marshalling a response to halt shortages that are already wreaking havoc in Africa, Asia and elsewhere.

Yet, with East and West so divided and North-South differences emerging, the potential for a G-20 agreement on a way forward appeared negligible. U.S. officials hinted there would be no group communique as there has been in previous years on key issues like terrorism, transnational crime, climate and economic matters.

U.S. officials said it was less important for the G-20 to present a unified stance as a entity than it would be for smaller blocs of countries and individual nations to speak out and take action.

The competition for support among the sides has been fierce. Wang and Lavrov each stopped in various Asian capitals on their way to Bali, drumming up support for various Chinese and Russian positions and fortifying their ties among non-allied nations.

Blinken, the French, Germans and Brits, meanwhile, all arrived in Bali from two Western-oriented and organized gatherings in Europe last week: the G-7 and NATO summits at which there was little sign of rancor or debate and unity on Ukraine was assured.

With its broader membership, including countries like host Indonesia and large developing nations like India, Brazil, South Africa and others, the G-20 is far more diverse, skeptical of Western intentions and more open to entreaties and offers from big neighbors like China and Russia and more vulnerable to their threats.

Attempting to ply a middle route, this year’s G-20 president, Indonesia, has tried to bridge what gaps are possible, laying out an agenda that is not inherently divisive or political. The country has sought to remain neutral in dealing with Russia’s invasion of Ukraine, and President Joko Widodo has been guarded in his comments.

But as is often the case, the largest participants will likely control the final message and China, Russia and the U.S. are battling for supremacy.