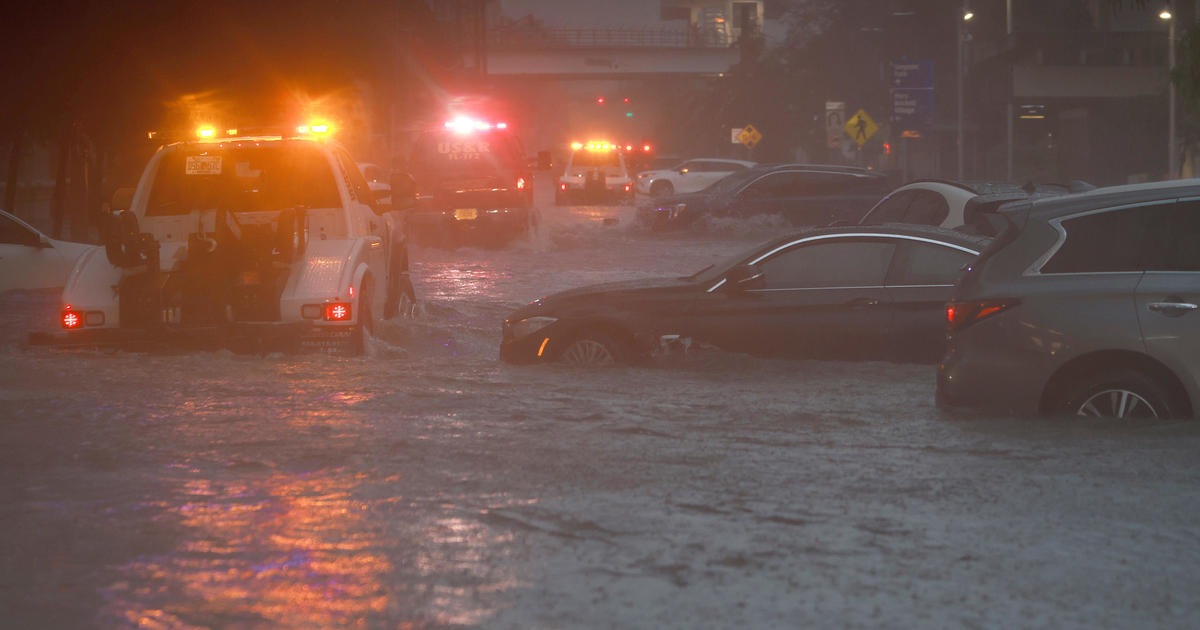 Parts of South Florida were hit with heavy rain, local flooding and wind Saturday as a storm system that had previously battered Mexico moved across the state. Flooding rains also threatened the northwestern Bahamas.

Officials in Miami warned drivers about road conditions as many cars were stuck on flooded streets.

“This is a dangerous and life-threatening situation. Traveling during these conditions is not recommended. It’s better to wait. Turn around, don’t drown,” the city of Miami tweeted.

The city was towing stranded vehicles from flooder roadways. At least one tree had fallen over a house in Pompano Beach, displacing its residents, according to CBS Miami.

The National Hurricane Center in Miami said the storm, once known as Agatha in the Pacific Ocean, will be known as Alex in the Atlantic Ocean basin, if it reaches tropical storm status.

As of 8 p.m. ET, the storm’s center was located about 105 miles northeast of Fort Pierce, Florida, and about 885 miles west-southwest of Bermuda. It was moving northeast at 18 mph with maximum sustained winds of 45 mph, the National Hurricane Center said.

The storm is expected to reach tropical storm strength off Florida’s eastern coast by Saturday night and is expected to strengthen through Monday as it moves away from Florida and into the Atlantic Ocean.

In Cuba, the storm killed three people, damaged dozens of homes in Havana and cut off electricity in some areas, according to authorities. Heavy rainfall continued on Saturday, but was diminishing as the weather system moved away from the island.

Miami-Dade County Mayor Daniella Levine Cava said most government services, such as bus routes and trains, planned to operate as normal over the weekend. Canal levels in South Florida have been lowered to minimize flooding from heavy rains.

The Atlantic hurricane season officially began Tuesday. This is an unusually early start to the storm season but not unprecedented for Florida.

The National Hurricane Center predicts that rainfall up to 10 inches (25 centimeters) is possible in South Florida, including the Florida Keys. The storm is not expected to produce huge winds or major storm surge. But local flooding is likely.