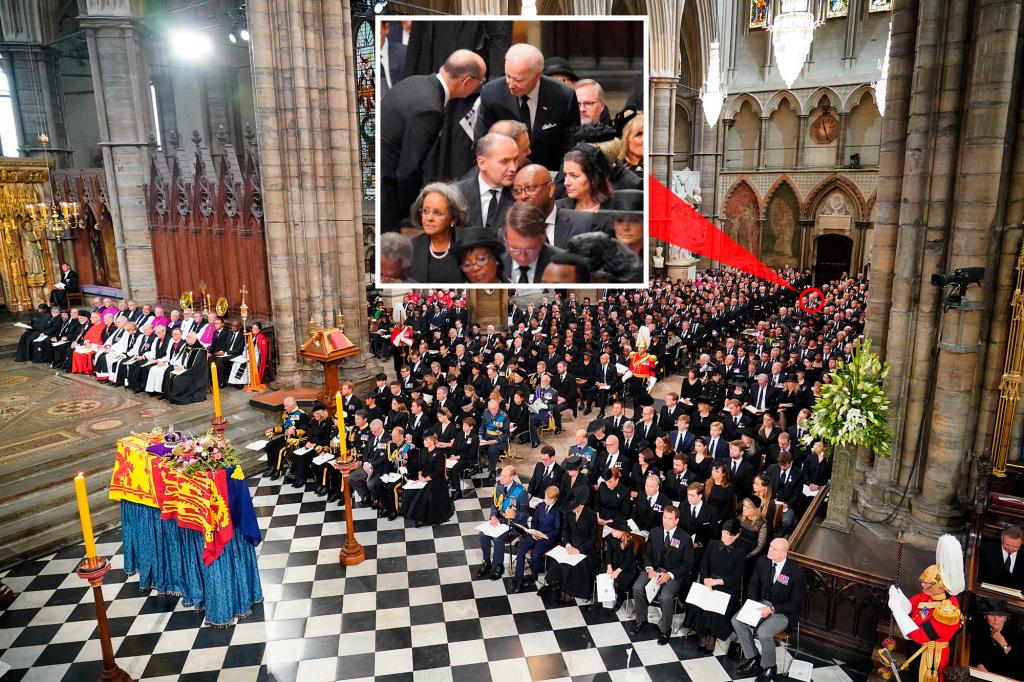 President Biden may be the world’s most powerful man, but it didn’t ensure him a front-row seat at Queen Elizabeth II’s funeral in London on Monday.

The president and first lady Jill Biden were seated 14 rows back during the service at Westminster Abbey that drew 2,000 guests — including some 500 of the world’s presidents, kings, princes and prime ministers.

Perhaps taken into consideration was that the couple was among the few dignitaries who were granted permission to travel in their own presidential limousine, nicknamed “The Beast,” for security reasons.

Most other leaders, including Canadian Prime Minister Justin Trudeau, were escorted to the funeral on shuttle buses due to tight security and road restrictions in place across London.

Taking their own transportation meant the Bidens also apparently arrived later than scheduled after getting caught in standstill traffic, the Guardian reported.

Once they finally arrived outside Westminster, the president and first lady were forced to wait to take their seats so they didn’t interrupt the painstakingly choreographed funeral.

The couple had to wait briefly at the doors of the church as a procession of George and Victoria Cross-holders — those awarded the highest military honor — headed into the abbey.

Biden was seated behind Polish President Andrzej Duda and in front of the Czech Republic’s Prime Minister Petr Fiala, according to the seating plan released Monday.

Jill Biden was sitting next to Switzerland’s President Ignazio Cassis.

Higher up the pecking order were the leaders of Commonwealth countries and those that still consider the UK monarch their head of state.

The Queen’s service marked the first state funeral in Britain since Winston Churchill was afforded the honor in 1965.

Piglet in Germany makes friends with cows after it was abandoned by its own herd : NPR

Intel Arc A770 and A750 desktop GPUs arrive for testing

Piglet in Germany makes friends with cows after it was abandoned by its own herd : NPR

Intel Arc A770 and A750 desktop GPUs arrive for testing