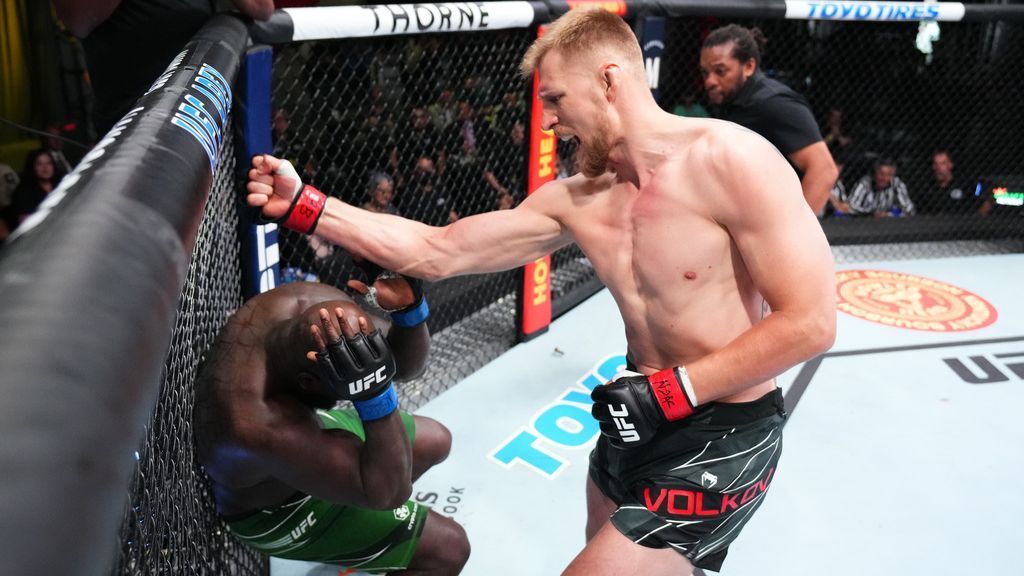 Alexander Volkov landed a big straight hand, then another. He followed with a massive left hook that sent Jairzinho Rozenstruik‘s mouthpiece flying from his jaw to the Octagon canvas.

Volkov kept pumping that long punching combination until referee Herb Dean put a stop to things. The TKO finish for the 6-foot-7 heavyweight Volkov came at 2:12 of the first round. It was Volkov’s quickest finish in his six years in the UFC.

“I know that he does not have good defense [at that moment], back to the cage,” Volkov said in his postfight interview. “I just see him go to the cage and just go forward for the knockout. Good fight.”

Rozenstruik protested the stoppage a bit with Dean. He did not get dropped, though he was hurt and Dean seemed to believe Rozenstruik had ceased intelligently defending himself.

Volkov said it’s his desire to “go forward in the division.” ESPN has Volkov ranked No. 8 and Rozenstruik ranked No. 10 in the world at heavyweight.

“Now I’m waiting for next fight,” Volkov said. “I’m ready for anything.”

Rozenstruik landed a crisp left hook on a counter early in the first round. Volkov, though, pressed forward and landed those big shots when he saw Rozenstruik’s back toward the cage.

Volkov (35-10) has won two of his past three fights. Most recently, the fighter from Russia lost via second-round submission to Tom Aspinall at UFC London in March. Volkov, 33, has a 9-4 UFC record and is a former M-1 heavyweight champion.

Rozenstruik (12-4) has dropped two straight and four of his past six. The fighter from Suriname has not won since a TKO over Augusto Sakai in June 2021. Rozenstruik, 34, has a 6-4 UFC record.